The Haunts: Stories of Vulgar Civilisation 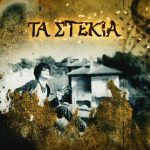 “The Haunts: Stories of Vulgar Civilisation” is a documentary series of the late Nikos Triandafyllidis that records the urban stories through space and time of the areas of mass gathering.

The places we call “Haunts” are not only centers of group expression within the framing of established times but also carriers of the unwritten history of the city through the continuity of time. When writing down the scattered urban stories, we can compose the “bigger picture” like a modern mosaic, through the field observation that connects the viewer immediately, daily and meaningfully with the spaces and the people it focuses on.

The series “The Haunts: Stories of Vulgar Civilisation” used to be broadcasted by the Hellenic Broadcasting Corporation (ERT) and the episodes are 50 minutes long. The “Au Revoir”, the “Shack of Simon”, the “Videoclub”, the “Stadium”, the “Rose”, the “Philologist Coffeehouse”, the “Discotheque”, the “Tavern”, the “Barber Shop”, the “Fokionos Negri”, the “Βoîtes” and the “Urban Stoas” are a few of the Haunts that the camera of the series has visited.